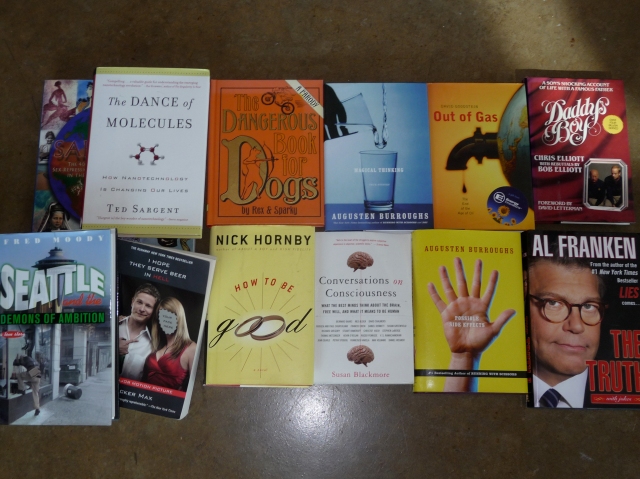 The first, of what I suspect will be many, book purges.

You see, books are my biggest “road to Hell is paved with good intentions.” I’ve got an entire bookshelf stuffed with books I was GOING to read sometime, that seemed like something I MIGHT be interested in, was a book I SHOULD want to read.

In a lot of ways, books are the part of the RID project I dread the most. I tend to define myself by what I know, what nugget, fact, or theory I’ve read about that I can connect to my job, my life, my relationships, — whatever. So getting rid of a book, especially one I haven’t read, feels like I’m giving up on knowledge I COULD have had.

In short, I’m the kind of guy who doesn’t want to feel that he’s missed out on ANYTHING – and that’s what the core of the RID project is about – choosing what to rid, so I make better choices on what NOT to rid.

Or better yet – maybe, just maybe…what to go get.

So – above sits the first book purge. I thought it’d be helpful to rid myself of several in the first attempt. Pictured above are some I’ve read, some I haven’t, (and never would have, if I’m honest with myself) and one that I read half of — and decided I just wasn’t into.

I’ll let you guess which is which.

PERSONAL ANECDOTE: Kicking off the RID project has been interesting – to say the least. I’m honored and flattered to have so many people sending me comments, personal email, and Facebook notes voicing support, comments, and opinions about the project. It’s nice to know what I’m doing has struck a chord with so many, so quickly.

I’ll be writing a post soon about the nature of stuff, memories, and people. The connections and what this project has already done. The question of whether we ever REALLY rid.

But, in the meantime, I wanted to just send a personal welcome and thanks to anyone who’s visiting.

Thanks, and tune in tomorrow.

This entry was posted in Books, PERSONAL ANECDOTE. Bookmark the permalink.