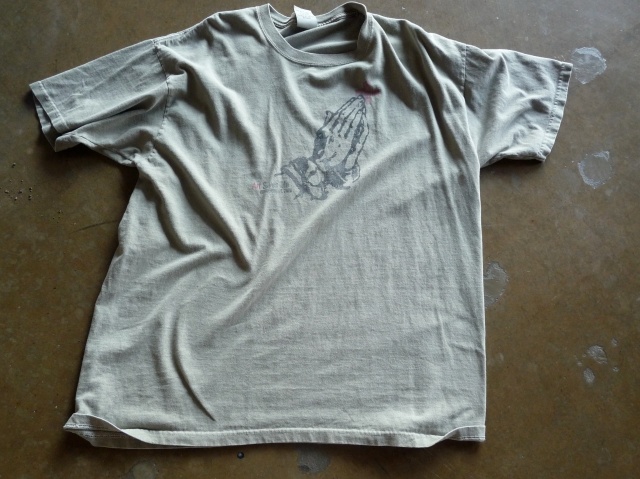 Leads to a bit 'o confusion in Texas - land of rampant Christianism.

It’s interesting being an atheist in Texas. Especially when you’ve moved from Seattle.

I truly feel like an alien who has landed here sometimes – religion is so pervasive, and so assumed…that people bring it up in conversations that no one would’ve on the West Coast. Not because it’s controversial….but frankly, because it’s rude.

I loved wearing the T-shirt above in Seattle. I got it at Bumbershoot, the annual Labor Day arts and music festival. It simply depicts a pair of praying hands — but at the lower left…if you squint…you’ll notice it reads “Art Saves Me.”

It’s a statement that I wholeheartedly agree with.

I wrote about my “10 percent rule” with T-shirts a couple of days ago. That I enjoy wearing T-shirts that about 10 percent people get; and respond with a knowing smile.

This T-shirt FAILS in the biggest way on that front in Texas. It produces knowing smiles, but ones that represent something far afield from what this shirt means.

This is the second RID project item that is specifically tied to my move.

I’m hoping there won’t be many more. It gives me too much pause.

PERSONAL ANECDOTE: I was recently invited to an event that makes me think about religion as “stuff” in a broader category. And I’m coming face-to-face with the fact that I don’t treat all religions equally, despite how I like to see myself as “Mr. OpenMinded Liberal from the West Coast who’s arrived in Texas.” I’ll be blogging about this soon, but here’s the central question…When you’re not aligned with a particular group, and you don’t really much care, BUT you’re forced to point out repeatedly that you don’t care, do you end up resenting that fact that you have to deal with it all…and how does one keep that anger in check? Any tips? Feel free to email them along…I DO have a technique for dealing with this, but I’m just not sure it’s the right one…

This entry was posted in Clothing, PERSONAL ANECDOTE. Bookmark the permalink.